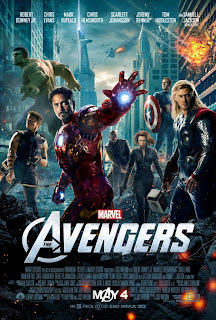 Warning: This won’t exactly be a critical analysis of the film, but rather a continuous exclamation of pure enjoyment. Also, mild spoilers ahead.
I honestly don’t think I’ve ever had so much fun watching a film. The Avengers has to be one of the most entertaining movies I’ve ever seen. I’ve seen all five Marvel movies that built up to it, and enjoyed each of them immensely, especially the then-surprise hit, Iron Man. Yet despite that, I still walked out of The Avengers pleasantly surprised to find out that I got so much more from it than I’d expected walking in.
When the trailers showed Loki as the villain, I was slightly worried. Out of all the superhero films released under Marvel’s production, Thor was the one that required the largest amount of suspension of disbelief, which is saying a lot for a universe that includes Iron Man and the Hulk, mostly because it introduced the concept of multiple worlds existing simultaneously in different dimensions. Iron Man and The Incredible Hulk did have a wild amount of science-fiction, but neither entered the realm of pure fantasy, which Thor strolled into right from the beginning. However, Thor got away with it by not taking itself too seriously, and it was saved by its lightheartedness, and an unexpectedly great performance by Tom Hiddleston as Loki. And while it is difficult to accept that the science fiction-based story of Iron Man could exist in the same universe as the highly mythological story of Thor, it worked simply by being a separate film. But this was not the case with The Avengers, where Thor had to share the screen with Tony Stark, Bruce Banner, and Steve Rogers, and fight Loki alongside them. Add to that the fact that Loki was accompanied by an army of aliens, and you end up with quite a tough pill for the audience to swallow. 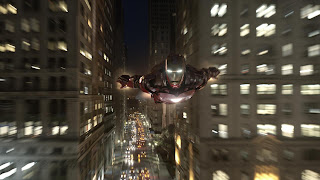 But Joss Whedon handled it perfectly, helping us gulp down the pill with streams of fresh, delicious water. Throughout the years of comic book movie adaptations, filmmakers have struggled with believability, giving the heroes enough superpowers to set them apart, but never going so far as to have them battle aliens or interdimensional beings, or give them technology that’s too futuristic. But Marvel doesn’t do that; it maintains faithfulness to its source material, and places (often ridiculous) entertainment above all else, the complete opposite of Christopher Nolan’s approach. And it works just as well.
Whedon doesn’t waste time; he simply assumes the audience got used to the idea of Loki in Thor, and moves on. Aside from that, the aliens are barely given any screen time or exposition, not even giving us enough time to consider suspending our disbelief. They’re just CGI placeholders for the Avengers to battle, and while I’d usually consider that a negative, in this film that was all they needed to be, like the stormtroopers in Star Wars. And it worked, because this film was not about the villains, or their evil scheme of world domination or whatever it was. This film was about the heroes themselves. 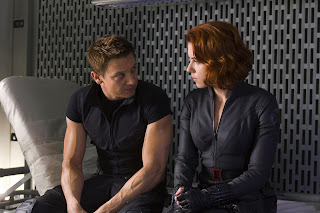 That’s where it truly shone. Each of the featured superheroes (Iron Man, the Hulk, Thor, and Captain America) had origin films of their own where they were properly fleshed out, and the supporting players (Nick Fury, Phil Coulson, Black Widow, and Hawkeye) made appearances of varying lengths during those films. It seemed all The Avengers needed to do was stick them together and have them fight bad guys (which it eventually did), but it wasn’t satisfied with just that. Each of the main characters was brought into The Avengers with the buildup and impact of beloved characters being reintroduced, and yet it also felt like they were introduced for the first time. Iron Man, of course, received the major glorious entrance, being the de facto captain of the team, but it was Thor’s entrance that was my favourite, though I won’t spoil anything here. After being brought together, they didn’t simply team up and start kicking ass; there was friction (as you’d expect from a decently written story), and they obviously didn’t get along too well at first, which led to some brilliant dialogue that was so well-scripted it felt improvised. The witty lines were not simply reserved for Tony Stark this time, and kudos to Joss Whedon for the dynamic and fun interaction between the characters, and the villains too. While there certainly was enough character development in the protagonists’ individual films, it wasn’t enough for Whedon. Tony Stark, especially, still had a lot of growing to do as a character, as did the rest of them to a lesser degree. Each character was probed and prodded further, including Black Widow and Hawkeye, who before this film were not given much importance, and yet in The Avengers were given backstories and were allowed character development and some truly badass moments, without taking up too much time from the rest of the heroes.
This is yet another thing the film miraculously excels at: every character is given his or her due. Nobody had less than enough screentime, not Tony, or Bruce, or Thor, or Cap, or Fury, Black Widow, Hawkeye, or even Agent Coulson (one of my favourite characters in the Marvel universe who got several great moments). Even Pepper Potts, Dr. Selvig, and Cobie Smulders’s character had good screentime, and even Natalie Portman’s Jane Foster made an appearance (as a still photo on a PC, but still). No character stole the spotlight, even though many feared that Tony Stark would, and no character was pushed to the side, a miraculous feat considering the enormous array of main characters in this team. 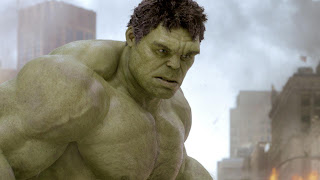 In addition to that, several plotlines from the previous films were either picked up or casually mentioned, giving the set of Marvel films so far remarkable cohesion and continuity. Plot threads as old as the first Iron Man film (such as the arc reactor) and as recent as Captain America (the Tesseract) are brought together, making the whole Marvel project look intricately planned. Even the gadgets that Iron Man uses, JARVIS included, were not modified a bit, and a lot of them were used. The movie even had time to introduce a new Iron Man suit (Mark 7), and this wasn’t even an Iron Man movie! I don’t know how Whedon pulled all of this off in just over two hours, but he did it to perfection. I honestly didn’t expect to see such a well-rounded group of heroes, and Hawkeye and Black Widow grew more as characters with their limited screentime here than Black Widow did throughout her entire extended appearance in Iron Man 2 (Hawkeye’s appearance in Thor was negligible).
I think part of the reason the heroes were so well-developed is the fact that the villains were barely touched upon. As I said, the movie was about the Avengers themselves, each of them finally coming to terms with being a hero (rather than a smug billionaire, a scientific freak, a god of thunder, and a World War II experiment, respectively), and the villains were there only as an incentive for them to come together, and give the audience one incredibly memorable, adrenaline-pumping, cheers-and-applause-inducing climactic showdown that was seriously jaw-dropping. But I’ll get to that in a bit. 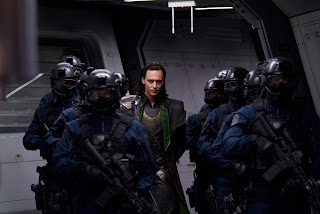 That’s not to say the villains were completely ignored, though. While the aliens were no more than faceless drones, the film needed an antagonist, and found a spine-chilling one in Tom Hiddleston’s Loki. In retrospect, it was a brilliant move to bring him back. He easily gave the best performance in Thor, and Loki was a far more effective villain than Stane (Iron Man), Blonsky (The Incredible Hulk), Vanko (Iron Man 2), or even Hugo Weaving’s Johann Schmidt (Captain America) had been, though Blonsky was enjoyable and Schmidt was the closest. And I found it a wonderful idea to bring back an already established villain instead of wasting time introducing a new one, time that was better spent, as I said, developing the Avengers themselves. Already established, however, doesn’t mean there were no surprises. As good as Hiddleston was in Thor, he was simply phenomenal in The Avengers, appropriately spine-chilling, dropping the daddy issues that had plagued him in Thor (though without losing the essence of the character), and gaining confidence and malevolence. Halfway through the movie he gives Black Widow a monologue that started as a cold hiss and escalated into shouting that left my mouth gaping. Very well-written, even better acted. 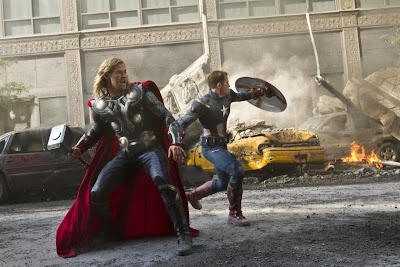 Finally, the action. My God, the action. At first, considering how well-tied together the Marvel movieverse was, all of those superheroes coming together seemed natural. But when it finally happened, it was still surreal, and nothing short of extraordinary. Those were characters I watched in separate films of their own, and characters I’d grown to love, and that made all the difference. Emotional investment. Even if we know they were never in any real danger, just the sight of Iron Man flying in-between New York buildings as Captain America and Black Widow sprint down the street below him, with Thor standing on a building conjuring thunder next to Hawkeye who’s firing arrow after arrow with awesome accuracy and Hulk flying around smashing everything he sees, all in one breathtaking long take, draws nothing but cheers from an audience that simply loves those guys. The immense diversity of their much-beloved superpowers led to a visual showdown that kept your eyes glued to the screen and your heart pumping. It was an amazing spectacle; I never thought I’d actually enjoy an extended sequence of pure action, but it was executed perfectly.
I actually never even thought I’d enjoy this film so much. I honestly thought I knew what to expect, but that was far from the truth. I enjoy the occasional turn-off-your-brain fun summer film, but the amount of fun I got from this movie is ridiculous and was certainly not anticipated. It certainly did help that I’d grown quite fond of the characters over the last four years, and the movie itself only reinforced their likability by proving they have great chemistry together. While knowing and liking the previous Marvel films is certainly not a prerequisite, I believe it certainly cranks up the enjoyment factor. In any case, I highly recommend you give it a watch. It’s the ultimate summer film, and you won’t get better than that in terms of pure, unadulterated entertainment. At least until the sequel comes out.

This work by Louis Ghanem is licensed under a Creative Commons Attribution-NonCommercial-NoDerivs 3.0 Unported License.
© Louis Ghanem, 2013-2015. Unauthorized use and/or duplication of this material without express and written permission from this blog’s author and/or owner is strictly prohibited. Excerpts and links may be used, provided that full and clear credit is given to Louis Ghanem with appropriate and specific direction to the original content.
Powered by WordPress | Theme: Mog by hndr